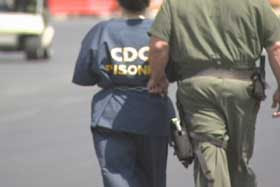 The balance of power between prisoners and their overseers is pretty one-sided in favor of the overseers. When an inmate accuses a guard of sexual harassment, a federal appeals court says, the guard must be prepared to prove that whatever happened was with the inmate’s consent. As the Ninth U.S. Circuit Court of Appeals put it this week, “because of the enormous power imbalance between prisoners and prison guards, labeling a prisoner’s decision to engage in sexual conduct in prison as ‘consent’ is a dubious proposition.” The San Francisco-based court reinstated a lawsuit by inmate Lance Wood against the Idaho prison system and a former guard named Sandra de Martin. According to the ruling, Wood, who is serving a life sentence for murder, said Martin “pursued” him after she was assigned to his unit in 2002. They developed what he described as a romantic but non-sexual relationship. A few months later, Wood said he started hearing rumors that Martin was married, which bothered him because he had become strongly religious while in prison. She denied being married, but he asked her to stay away. Twenty minutes later, he said, she entered his cell and put her hand on his groin, and he pushed her away. He said the guard did the same thing another time after a series of what he described as aggressive pat searches, despite his attempts to end the relationship. He finally filed a complaint with a prison officer and was transferred to another prison. Wood’s lawyer said the allegations did not result in any disciplinary action against Martin, who has since left the prison system. Wood’s lawsuit claimed he had been subjected to harassment that violated the constitutional ban on cruel and unusual punishment, since it was inflicted by a prison guard. But U.S. District Judge William Shubb dismissed the suit, saying the alleged groping was part of a “consensual relationship” rather than involuntary harassment. The appeals court had a different perspective. Prisoners have little control over their daily lives, the court said, and depend on prison employees for basic necessities. A guard’s power over an inmate has been compared to the power of an adult over a child, or even of a master over a slave, the court said. At the same time, ”sexual abuse in prison is prolific,” the court said, and most often involves a female guard and a male prisoner, according to government statistics. In the typical sexual harassment case, it’s up to the plaintiff to prove that he or she objected to the sexual conduct. In a prison setting, the court said, sexual contact by a guard with an inmate will be presumed to be unwelcome, and it will be up to the guard to prove consent. In this case, Wood’s allegations, if true, would show that he did not consent, and he is entitled to take his suit to trial, the court said. Judge Betty Fletcher wrote the 3-0 ruling, which can be viewed here: www.ca9.uscourts.gov/datastore/opinions/2012/09/04/10-35300.pdf. The ruling is “very important in terms of protecting prisoners,” said Wood’s lawyer, Thomas Saunders. Although the facts have yet to be established — both Wood and Martin took polygraph tests and passed, Saunders said — the inmate has “strong evidence of non-consent” and hopes a jury will vindicate his rights. Prison officials could appeal the ruling. Their lawyers were unavailable for comment.
Posted by Unknown at 11:39 AM