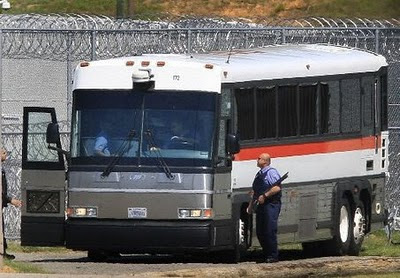 HARRISBURG, Pa. (AP) – Dawn had barely broken when prison guards shook Raheem Tucker awake and told him to pack his belongings and board a bus that would be taking him to another institution 500 miles away: the Muskegon Correctional Facility in western Michigan.

“He didn't get any other warning,” said his father, Rob Tucker, 56, who lives in Northeast Philadelphia, “and he didn't get any say-so. We only found out because a friend of his called us to tell us.”

That is how Pennsylvania Corrections officials say they must handle the delicate – and controversial – task of shipping 2,100 inmates out of state as a way to ease an overcrowding problem that has reached near-crisis proportions.

So far, 1,633 inmates have been transferred to Michigan and Virginia, the two states that Pennsylvania has contracted with to accept its prisoners. The remaining 467 will be moved by the end of the month.

“Sending inmates out of state was a last resort, but we became so overwhelmed that I became concerned about the safety of the system,” said state Corrections Secretary Jeffrey Beard. “We couldn't go on the way we have been.”

Although Pennsylvania's prison population has been on the rise for decades, it has jumped dramatically just in the last five years – so much so that corrections officials say the four prisons under construction will be at capacity as soon as they open in 2013.

That increase was only compounded when, in 2008, Gov. Rendell issued what ended up being a two-month moratorium on paroles after a paroled felon killed a Philadelphia police officer.
During that time, prisoners kept entering the system, but none were being released. Even after the moratorium was lifted, the parole rate – which had hovered for years about 62 percent – fell to a low of 37 percent.

“The parole rate is rebounding,” said Beard, “but if nothing changes, we'll still be in as bad a shape in 2013 that we are today, even with the new prisons.”

Overcrowding comes with a price tag: The Corrections Department has requested $1.9 billion in state funding for fiscal 2010-11. That alone would make up almost 7 percent of the state's overall $29 billion in proposed general-fund spending.

That is why, late last year, Beard announced the state was moving 2,000 prisoners to out-of-state lockups: half to the Muskegon facility in Michigan and the remainder to the Green Rock prison in Chatham, Va.

The announcement immediately raised questions about how inmates would be selected for the transfer, and ignited concerns that it would be costly and do nothing to deal with the broader problem of too many inmates entering state prisons.

And there have been bumps since the transfers began: At least 75 inmates have been returned because of health and other issues.

“This business of sending people out of state is not only a tremendously expensive strategy of dealing with the problem, it will do little to alleviate dangerous overcrowding in the long term,” said Bill DiMascio, executive director of the Pennsylvania Prison Society, a private nonprofit that advocates for prisoners and for improvements to the criminal-justice system.

DiMascio is among a growing number of officials in the corrections world – Beard included – pushing for alternatives to incarceration, including community-based treatment for low-level offenders.

As it stands now, the majority of available bed space in state prisons – about 52 percent – is occupied by nonviolent offenders and parole violators, according to the state corrections office.

But such changes would require legislative action, and lawmakers have been slow, if not downright reluctant, to tackle them.

“The concern is the perception that we're turning soft on crime,” said Sen. Stewart Greenleaf (R., Montgomery), who is pushing a package of bills to change sentencing and parole rules.
“But we can still be tough on crime while at the same time be smart on crime,” he added.

Short of legislative changes, corrections officials say they had to do something to address overcrowding.

Pennsylvania decided to contract with prisons in Virginia and Michigan because of their proximity, corrections officials said.

Prisoners chosen for the transfer were ones who receive “none to few visits,” have no medical or mental-health concerns, and have more than two years to serve on their sentence, said Corrections Department spokeswoman Susan Bensinger.

Bensinger acknowledged that prisoners get little notice that they are being transferred. The reason, she said, is simple: security.

“We would never want an inmate calling outside people and saying, 'Hey they are putting me on a bus tonight,' “ she said.

On days that inmates are being moved, the entire prison goes into lockdown, Bensinger said. The prisoners – all men – are then boarded onto unmarked buses, and handcuffed and shackled for the ride to their new facility.

Once inmates arrive there, they receive form letters telling them where they are and how they can contact their families.

Pennsylvania intends to bring them back by 2013.

“Moving is a traumatic event, but the majority of inmates are content now that they've settled in,” said Bensinger, the Corrections Department spokeswoman. “But we know it's impossible to make everyone happy.”

Tucker, the Northeast Philadelphia resident whose son was moved to Michigan in February, said the transfers are not just hard on prisoners. They are gut-wrenching for families, too.

Before, he and other family members would rent a van once or twice a year and drive to Greene County in Western Pennsylvania, where Raheem used to be confined.
Now, he will have to fly.

“It's hard,” Tucker said. “I have diabetes and high blood pressure, and backaches. And it costs a lot of money for a whole family to fly.”

Joann Thigpen, 65, who lives in North Philadelphia, also has a son who was transferred.
Her son Willie had been serving time on a drug offense in the state prison near the Poconos when he was awakened one morning in February and told he was being moved to Virginia.

Thigpen said she had such bad arthritis that it was difficult to travel two hours when her son was in Pennsylvania. Instead, she went to the Pennsylvania Prison Society's Philadelphia offices to do a “virtual visit” through video with her son.

It angers her that that ended up penalizing her son, who was considered to have few visitors.
“I know that they have to do what they have to do, but it's not fair,” Thigpen said. “Our children may be in jail, but we're parents, too.”
Posted by Unknown at 2:18 PM