Family and focus helped him beat the odds 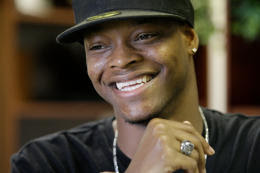 Houstonian Devon Wade, 20, is the first black student at LSU to receive the Harry S. Truman Scholarship, a $30,000 award.


By society's standards, Devon Wade should have been another grim statistic.

He's a young black male. He grew up in a northeast Houston low-income neighborhood infested with violence. And both his parents were behind prison bars for most of his life.

But it turns out that the 20-year-old Wade is, indeed, a statistic. A graduate of M.B. Smiley High School in the North Forest district, he's the first African-American student at Louisiana State University to receive the prestigious Harry S. Truman Scholarship Award.

The competitive award honors college juniors who show leadership potential. About 60 students across the country are selected each year and receive $30,000 to pursue graduate study in public service fields.

But for Wade, a straight-A student, the award is less about money and more about setting an example for other young black scholars.

In his neighborhood, lack of encouragement and complacency keeps many young people from looking beyond their world, he said. People often told him he would end up like his parents, but he made up his mind in middle school that his life would be different.

All it took was some tangible school recognition — candy and a coupon to Jack in the Box.

“I always did good in school but I didn't care,” Wade said. “When they honored me for doing good and making honor roll, I said, ‘They're going to reward me?' That was a changing factor in my life. That's when I became passionate about education.”
Raised by grandparents

While Wade's mind was on his studies, his heart yearned for the life he saw on TV — two parents at home, sitting around the Christmas tree with their children.

“I've always longed for that,” said Wade, whose boyish face belies his 6-foot-1-inch height. “I don't care if I'm 40 years old when it happens. I still want that.”

Wade has never met his father because he is in federal prison. His mother has been in and out of state prison throughout his life. His maternal grandparents raised him, his identical twin and two younger brothers, who are in college and high school. His granny made sure the four brothers had contact with their parents. The boys exchanged letters with their father and visited their mother in prison.

He said he never talked about his parents being incarcerated because of the stigma. “People look down on you and treat you different. I didn't want people feeling sorry for me.”

He bottled up his emotions, which felt like he was carrying around a weight, and some days he felt depressed, he said. “Those are times when you need someone to talk to,” he said.

In high school, Wade, then 15, turned to No More Victims Inc., a Houston nonprofit that provides support for youths whose parents are incarcerated.

The group's founder, Marilyn Gambrell, remembers the quiet and shy boy who didn't say much during meetings but was always observant and attentive. He also was angry back then and got into fights, she said.

“But all the brilliance we knew was there is now spilling over,” Gambrell said proudly. “He's so expressive, well-spoken and confident.”

He's now working on double majors — sociology with a concentration on criminal justice, and African-American studies — and on a thesis on how the stigma of having incarcerated parents affects children's education.
Travel opportunities

Last summer Wade studied in Africa, where he honed his fluency in Swahili. This summer he'll participate in a research program at the University of Chicago and will be on track to graduate early in December. His goal is to become an FBI agent.

“I'm just so proud of my boy,” said his mother, Suzanne Wade, who was paroled last year and recently completed a commercial driving certificate program at Houston Community College. “I've always told him to not travel down my path, to continue to think positive, do good and stay focused. I'm grateful he's on the right track.

“I owe my parents a great deal,” she said. “All my boys are doing great.”

Wade, who is active on his college campus, never misses an opportunity to give back. He mentors students in No More Victims and in a community program in Louisiana.

“I had to go through so much I didn't want to go through,” he said. “It's important for those who make it out to come back. That's what the community lacks.”
Posted by Unknown at 2:05 PM