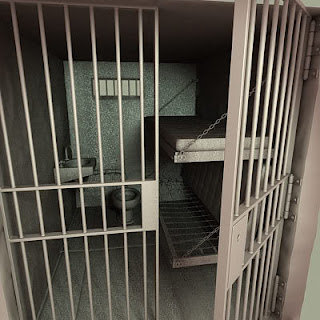 Research shows need for training and detox to stop pattern of re-offending.

Men in their late teens are the most neglected section of the prison population despite being the most prolific re-offenders in the country, a new study will reveal tomorrow.

In 2004 around 19,000 18-to-20-year-olds went to prison at a cost of $35,000 each per year. Many receive sentences of a year or less which, in practice, means only a few months served in jail. Seven out of 10 are back in prison within two years. According to the report, Out for Good, written by Finola Farrant for the Howard League for Penal Reform, these brief periods of incarceration mean that young offenders lose jobs, apprenticeships, girlfriends, family contacts, children and often a place to live. Inside, they are offered little in the way of effective detox programes or constructive help with education, training, social skills and anger management.

'Prison is a place of aggression in which a young adult learns even more about selfishness and violence as forms of survival,' said Farrant. 'Instead of reflecting on the impact on their victims and communities, many come to blame their victims for their incarceration. Prison infantilises these 18-to-20-year-olds at a crucial moment in their development. A vital opportunity to recast themselves as men with a non-criminal future is lost.'

Farrant interviewed 86 young offenders, aged between 18 and 20, over two years. They were re-interviewed just prior to release and seen again after release. Three-quarters of their offending was related to alcohol or drug misuse (some spending between $80 and $1,500 per day on drugs); 60 per cent had previous experience of custody; 30 per cent were fathers or about to become fathers; 24 per cent had been in care; and 20 per cent had been homeless at the point of imprisonment.

Lee, 19, said: 'I went into care when I was nine years old. My mom was drinking... my brother got adopted out. I started drinking right heavy. My dad was violent... Had my daughter when I was 16 but I haven't seen her for months. My mom died while I were inside and they wouldn't even let me go to the funeral.'

A number of reports have dwelt on recurring patterns in the prison population - illiteracy, self-harm, chaotic childhoods, mental ill-health, racism and physical and emotional abuse all figure prominently. The need for training, education, housing and employment to help with resettlement has been made repeatedly. Out for Good argues that practical help for 18-to-20-year-olds is lacking but, unique among recent reports, it also says that more needs to be done to show young offenders that 'being a man' does not have to involve living a life of crime. The government has set a target of reducing re-offending by 10 per cent by 2010.

Farrant said: 'They [young offenders] explain involvement in crime as a way of gaining respect. Yet, in interviews, many also expressed a desire for something better - one said "I know I'd stay out of trouble if I was up in the morning and going to work, that would be the thing".' None of the young men in the final interviews had been encouraged to apply for employment or training while in prison.

Under the new National Offenders Management Service (NOMS) more is on offer for this group, but many in the penal service say that similar promises have been made in the past with few results.

Farrant said improved training for prison and probation officers was needed. She also called for the creation of advocates to offer sustained support. An advocate, for instance, might have helped Darren, aged 20 and illiterate. At 14, he was introduced to heroin by his uncle. He wants to go on a detox programme, but he said:

'In prison I don't get to see no one so it's got to be when I get out, but I can't write so I can't even make an application...' In frustration, he added, summing up the feeling of many of the young offenders in the study: 'You can't fucking change your life in a couple of months.'

The report makes a number of other recommendations, including greater use of community sentences; family mediation to help mend ruptured relationships; improved access to detox programes; a statutory duty on local authorities to house homeless prisoners on release; and job training inside jail and after release.
Posted by Unknown at 7:51 AM