Women In The California Prisons System 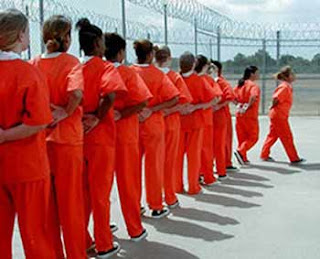 * Roughly 80% of women in California prisons are mothers, and the majority of these women are single caretakers. (Barbara Bloom)

* Due to stringent regulations on the attire of visitors, many family members have been turned away after traveling hours or even days to visit a woman in prison. In one instance a baby was unable to see its mother because it was wearing a denim jump suit. Children have also been turned away for wearing shorts.

* In the California prison system, visitation is a privilege not a right. Prisoners on death row and prisons in California serving life sentences without parole cannot receive unsupervised family visits. Family visits are also not permitted with common law relationships.

* All potential visitors to California prisons must submit a visiting questionnaire that requires the individual to state personal information, including full arrest record and criminal history. Verification time for questionnaires can be lengthy, and if any piece of information proves to be incorrect, access can be denied for up to 6 months.

* Most women in California's prisons are from urban areas of the state. However, the facilities that house the majority of the female prisons are in rural regions of California. Bus service to these locations can be limited and the trip often takes many hours. Chowchilla is home to two female correctional facilities, VSPW and CCWF. Together the populations of these two prisons comprise 62% of the total female prison population in the state. For a Los Angeles family to travel via bus to this location, it would take seven hours and cost $38 per person. If departing from San Francisco, the travel time would be five hours at a cost of $55 per person. The same family traveling by bus from LA to the California Institute for Women (CIW) in Frontera would still have to set aside five hours of travel time.

* The exorbitant cost of the current phone system for California state prisons places another enormous financial burden on inmate families. MCI charges California prisoners $3.00 just to connect collect calls from the prison in addition to high collect call fees. Calls paid by prisoners accrue high surcharges and charge the maximum per-minute rates. Prisoners are not permitted to use discount numbers like 1-800-COLLECT. Though phone companies allege that higher rates are necessary because of the expensive security systems required for prisons, the states also share responsibility for these high rates. Telephone companies are offering higher and higher commissions for states in order to get contracts. In some states, these commissions have gone as high as 60% of the profits earned by the state prison telephone system. The money the state of California receives from charges to prisoners and their families goes directly into the state's general fund and not the Inmate Welfare Fund.

* For women released from the California prison system the challenges for them and their children continue. Under new welfare reform guidelines, an individual previously incarcerated is not eligible for public benefits, including housing assistance.
Posted by Unknown at 8:08 AM