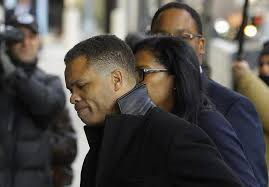 MONTGOMERY, Ala. (AP) - Former Illinois Rep. Jesse Jackson Jr. has been moved from the federal prison in North Carolina to a minimum security prison camp in Montgomery. A longtime friend of the Rev. Jesse Jackson, Democratic state Rep. Alvin Holmes of Montgomery, said the Jackson family contacted him Friday night about the 49-year-old former congressman being moved to the federal prison camp at Maxwell Air Force Base. The U.S. Bureau of Prisons' website now lists Jackson as a Montgomery inmate. Jackson is serving a 2 1/2 -year sentence after admitting to illegally using campaign money. The Bureau of Prisons lists his release date as Dec. 31, 2015. The Montgomery camp has housed several government figures over the years, including former Attorney General John Mitchell and former U.S. District Judge Harry Claiborne of Nevada.
Posted by Unknown at 8:50 AM