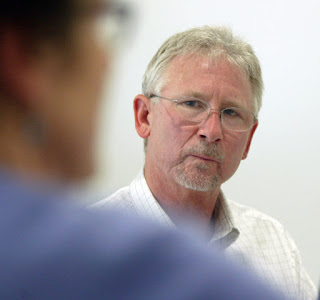 Jerry Morlock listens to MLive Community Engagement Specialist Paula Holmes-Greely as he participates in an MLive.com live chat in the Muskegon hub on January 10, 2013. He is an employer connections specialist with 2nd Chance Connections, a federally funded effort aimed at reducing recidivism among mothers and fathers coming out of prison and jail in Muskegon, Oceana and Ottawa counties. Everyone benefits when ex-offenders find jobs, a representative of 2nd Chance Connections, a federally funded effort aimed at reducing recidivism among mothers and fathers coming out of prison and jail in Muskegon, Oceana and Ottawa counties, told MLive and Muskegon Chronicle readers during a live chat Thursday. "If an ex-offender can't find work, and returns to prison, it costs all of us taxpayers $35,000 per year," said Jerry Morlock, who works with employers to create job opportunities for ex-offenders through 2nd Chance Connections. He said employers can benefit from hiring ex-offenders, too. "I believe it also helps the employer to find a valuable employee, maybe through a means they hadn't previously considered." Morlock said more employers hire ex-offenders in Muskegon County than people realize. Each year about 400 men and women leave Michigan’s prisons and return to live in communities across Muskegon County. He said finding jobs for ex-offenders gives them an opportunity to return to self-supporting status and get their lives back on track. "That also reduces the chance that they will return to prison," Morlock said. "Helping people stay out of trouble also helps the community by easing the burden on law enforcement agencies, the judicial system, and nonprofit, government and social welfare agencies that are overburdened already. "It also helps all of us as Michigan taxpayers," he said. "The state spends $2 billion a year on corrections $300 million more than we spend on higher education and communities colleges combined." In addition to working with employers to get ex-offenders hired, Morlock's agency also provides job training. Currently, 14 ex-offenders are receiving 128 hours of basic manufacturing training at Muskegon Community College. This is the second group to go through the training offered by 2nd Chance Connections. "They are being taught skills such as workplace safety, shop math, blueprint reading, basic measuring tools, machine operation and welding," Morlock said. He said the training program had been tweaked in response to employer comments following the graduation of the first group of graduates, something 2nd Chance Connections did to improve the pilot program and make it responsive to employers. Here's some additional issues Morlock addressed during the live chat: Q: What sorts of barriers do ex-offenders face in finding employment? A: Some ex-offenders leave incarceration with good work skills, or maybe connections through family or a former employer that help them find employment after they are released. But many come out with few skills, little experience and no work history, or at least a shortened work history. Those, of course, are huge hurdles. But a bigger one may be the stigma of their conviction. And that's the one that I try to address. They should not all be automatically excluded from every job opportunity because of that criminal history. To do that gives them a lifetime conviction, in a way, and little chance for improving themselves. Q: How can ex-offenders improve their chances for getting a job? A: Ex-offenders should follow all the conventional wisdom that applies to all job hunters, but I'll focus on a few that are specific to ex-offenders. First, be honest about your conviction and stress what you've learned from it. Be willing to work your way up (in other words, have realistic expectations about what job you might get), and volunteer! What better way to show people that you are looking to turn your life around than to show that you care about others, and want to help them, too. Q: How can that “support system” help employers evaluate ex-offenders as potential hires? A: Goodwill Industries, for example, has caseworkers that work with ex-offenders all through the process. Parolees go through a three-week stage in which they are taught job-hunting skills. They then undergo four weeks of work experience within the Goodwill system, mainly in Goodwill's industrial services department. During that time, the ex-offenders are evaluated on a weekly basis. By the time that's complete, the case managers have a pretty clear idea of who is motivated and ready to move to the next step -- regular employment. Parole agents, or parole supervisors, also are available to consult with employers about prospective candidates.
Posted by Unknown at 7:37 AM