After Prison, a Squeaky-Clean Return to Reality 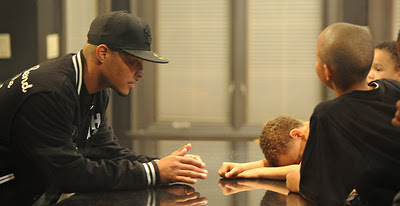 “Ain’t I been to jail enough times for you to know how to treat me when I come home?” the rapper T.I. asks his wife, Tameka, better known as Tiny, on the first episode of “T.I. & Tiny: The Family Hustle,” which has its premiere with back-to-back episodes Monday night on VH1, about two months after his most recent incarceration.

Maybe, maybe not. But T.I. has been to jail enough times to know how to recover quickly. He’s a great rapper, but he’s an even better quick-change artist who has come to understand and rely upon the forgiving powers of short memories.

What was T.I. behind bars for, again? No rapper — no celebrity in any genre, really — has more assiduously created an alternate persona through reality television than T.I. He gives a brief tour of his recent indiscretions (a drug-related probation violation) at the outset of this show, but he knows not to dwell. Unlike his previous use of reality television as image manipulation, on “T.I.’s Road to Redemption” in 2009 on MTV, in which he intervened in the lives of troubled young people, he skips right to the spit and polish this time.

There’s Ward Cleaver, Mike Brady and now T.I., a family patriarch and provider, loving husband, and charming father of six attention-seeking children. T.I. is handsome, wears a shawl-collar cardigan well and has phenomenal teeth — teeth that could get you out of some sticky situations by shine alone.

Seeing those teeth on camera as often as possible is certainly part of the T.I. public makeover process. It certainly works. In October, a few days after his release from a halfway house, he made an appearance with the squeaky-clean country princess Taylor Swift during a concert in Atlanta; in other cities she was joined by such chronic recidivists as James Taylor, Katy Perry and Justin Bieber.

“T.I. & Tiny: The Family Hustle” is a calm rejoinder to “Basketball Wives,” “Love & Hip Hop,” “The Real Housewives of Atlanta” and other top-volume tales of black celebrity life that dominate reality television. It’s purposefully neutered, in the style of “Run’s House,” which ran for six seasons on MTV chronicling the world of Rev Run, formerly Run of Run-DMC, who is now known as a jolly pushover dad. (See also: “Snoop Dogg’s Father Hood.”)

Filming began before T.I. was released; he appears in about one-third of the first episode, which focuses on Tiny’s preparations for his homecoming. (She too has become a reality TV regular in recent years thanks to “Tiny & Toya,” which she filmed largely during an earlier prison stint of T.I.’s.)

Not much tension follows his return, maybe because the spells apart have become routine. Tiny still looks at T.I. lustily, he at her maybe a little less so. “I been out of practice for a while,” he says about having sex, more because it’s a funny thing to say than because of any apparent insecurity. He frets over preserving the all-white room in his house in the face of rambunctious kids (“Get off my white couch!”) and over the distribution of toiletries in the bathroom. “I don’t want smell-goods of a fruity nature on my side of the sink,” he says. “Damn occupying America — we gon’ occupy my bathroom counter. I am taking it back!”

As a rapper T.I. wears hunger better than complacency. He’s been on an impressive run since his release, not unlike the impressive run he had the last time he was released. But where those songs are edgy, boastful and sometimes salacious, this show is sandpapered smooth. There’s a perpetual glint in his eye, but he never really gets up to the mischief he appears to really want to make — at least not anywhere the cameras might catch him.

Should that happen, though, and if it goes wrong and T.I. happens to be in need of yet another televised rebirth, here are some recommended image-cleansing options: vegan cuisine expert on the Food Network, producer of a hip-hop yoga show with Russell Simmons, Sunday morning televangelist, host of “Extreme Makeover: Home Edition.”
Posted by Unknown at 7:27 PM