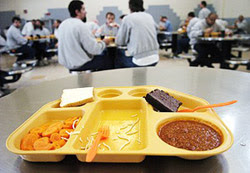 (AP) HOUSTON — Texas inmates who are set to be executed will no longer get their choice of last meals, a change prison officials made Thursday after a prominent state senator became miffed over an expansive request from a man condemned for a notorious dragging death.

Lawrence Russell Brewer, who was executed Wednesday for the hate crime slaying of James Byrd Jr. more than a decade ago, asked for two chicken fried steaks, a triple-meat bacon cheeseburger, fried okra, a pound of barbecue, three fajitas, a meat lover's pizza, a pint of ice cream and a slab of peanut butter fudge with crushed peanuts. Prison officials said Brewer didn't eat any of it.

"It is extremely inappropriate to give a person sentenced to death such a privilege," Sen. John Whitmire, chairman of the Senate Criminal Justice Committee, wrote in a letter Thursday to Brad Livingston, the executive director of the Texas Department of Criminal Justice.

Within hours, Livingston said the senator's concerns were valid and the practice of allowing death row offenders to choose their final meal was history.

"Effective immediately, no such accommodations will be made," Livingston said. "They will receive the same meal served to other offenders on the unit."

That had been the suggestion from Whitmire, who called the traditional request "ridiculous."

"It's long overdue," the Houston Democrat told The Associated Press. "This old boy last night, enough is enough. We're fixing to execute the guy and maybe it makes the system feel good about what they're fixing to do. Kind of hypocritical, you reckon?

"Mr. Byrd didn't get to choose his last meal. The whole deal is so illogical."

Brewer, a white supremacist gang member, was convicted of chaining Byrd, 49, to the back of a pickup truck and dragging him to his death along a bumpy road in a case shocked the nation for its brutality.

Whitmire warned in his letter that if the "last meal of choice" practice wasn't stopped immediately, he'd seek a state statute to end it when lawmakers convene in the next legislative session.

It was not immediately clear whether other states have made similar moves. Some limit the final meal cost — Florida's ceiling is $40, according to the Department of Corrections website, with food to be purchased locally. Others, like Texas, which never had a designated dollar limit, mandate meals be prison-made. Some states don't acknowledge final meals, and others will disclose the information only if the inmate agrees, said K. William Hayes, a Florida-based death penalty historian.

Some states require the meal within a specific time period, allow multiple "final" meals, restrict it to one or impose "a vast number of conditions," he said.

Historical references to a condemned person's last meal go as far back as ancient Greece, China and Rome, Hayes said. Some of it is apparently rooted in superstition about meals warding off possible haunting by condemned people once they are put to death.

The Death Penalty Information Center, a Washington-based anti-capital punishment organization that collects execution statistics, said it had no data on final meals.

Since Texas resumed carrying out executions in 1982, the state correction agency's practice has been to fill a condemned inmate's request as long as the items, or food similar to what was requested, were readily available from the prison kitchen supplies.

While extensive, Brewer's request was far from the largest or most bizarre among the 475 Texas inmates put to death.

On Tuesday, prisoner Cleve Foster's request included two fried chickens, French fries and a five-gallon bucket of peaches. He received a reprieve from the U.S. Supreme Court but none of his requested meal. He was on his way back to death row, at a prison about 45 miles east of Huntsville, at the time when his feast would have been served.

Years ago, a Texas inmate even requested dirt for his final meal.

Until 2003, the Texas prison system listed final meals of each prisoner as part of its death row website. That stopped at 313 final meals after officials said they received complaints from people who found it offensive.

A former inmate cook who made the last meals for prisoners at the Huntsville Unit, where Texas executions are carried out, wrote a cookbook several years ago after he was released. Among his recipes were Gallows Gravy, Rice Rigor Mortis and Old Sparky's Genuine Convict Chili, a nod to the electric chair that once served as the execution method. The book was called "Meals to Die For."
Posted by Unknown at 8:08 AM