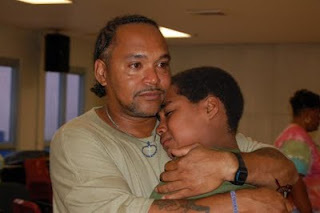 CHARLOTTE (MCT) -- Jarrisha Rorie of Charlotte says she married a good man, but his past caught up with him.

Now he's in prison and she's raising three boys who can't understand what happened to dad and why mom works all the time.

Rorie thought it would all work out, until her 7-year-old began having problems in school and was diagnosed with a stress disorder.

That's when she discovered a little-known, school-based program that helps kids deal with the stress and embarrassment of having a parent in jail or prison.

Unfortunately, it's also one of a handful of local initiatives that will suffer significant cuts on July 1, due to a loss of government money.

Rorie says it would be devastating to see a program shrink that offers training for both families and school staff.

"My children thought their dad was Superman, and they don't have a full understanding of how to cope with the separation," she says. "There's really nowhere else children can feel comfortable talking about their dads being locked up, and not feel shame."

The program, called Empowering Kids With Incarcerated Parents, is offered by the Center for Community Transitions at a time when the county has 5,000 kids with parents behind bars.

Statistics show those children are at greater risk of dropping out, and up to 70 percent will end up in trouble with the law.

The county provided $25,000 for the program last year but has since changed its priorities for nonprofit support. As a result, the money will be refocused on other initiatives at the center for transitions.

Meanwhile, the program is also losing another $80,000 because of state budget cuts.

The result: Instead of running programs for inmates' kids in up to seven schools a year, the center will cut back to no more than three schools. That means helping only 35 to 40 students, a third the number of the current school year.

The result could be more discipline problems in schools, including children acting violently, says Adeola Fearon, the family care coordinator with the program.

"We've had situations where one parent was incarcerated, and then the other parent became incarcerated," Fearon says.

"The siblings end up being taken in by different relatives, which means new school, new neighborhood and new home with new rules. These children end up feeling everyone is against them."

Michael Searcy of Charlotte can attest to what happens as a result: Two of his children went to prison while he was incarcerated for 17 years.

Searcy, 62, is volunteering for the program while waiting to be released from a federal halfway house on July 26.

"When you go to prison, you think it's not going to affect anybody but you, but it affects the entire family," he says.

"My two sons ended up incarcerated because of me not being there to help them make better choices."

Jarrisha Rorie says she believes the program will help keep her three boys in line until her husband is released next March.

In the meantime, the family has already taken the first step.

"My boys know their dad made a mistake, and we can forgive him."
Posted by Unknown at 9:07 AM